Untwinkling the Stars: Adaptive Optics on the Shane 3-meter Reflector

The quality of telescopic images depends on atmospheric conditions—what astronomers call “seeing.” Lick’s planners pioneered the now-universal practice of locating observatories where the seeing is optimal. But even at the best sites, Earth’s turbulent atmosphere limits the clarity of images in large telescopes. Adaptive Optics (AO) can overcome this limitation. The 3-meter Shane Telescope has played a leading role in AO’s development. 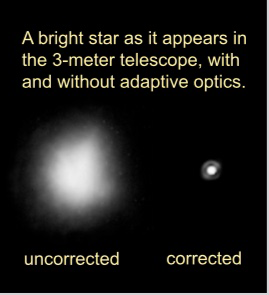 The light rays we see from a star race toward  us in parallel lines through almost-empty space. But passing through the atmosphere in the final moments of their long journey earthward, they are bent into many small but differing angles, making them hard to focus. AO measures and corrects these angles hundreds of times per second, straightening out the incoming light rays to produce a clear, steady image.

AO needs ample light to accurately measure atmospheric distortion, so it is only practical if the astronomical target happens to lie near a bright star or is itself sufficiently bright—and few objects meet these criteria. Laser guide stars (LGS) eliminate this constraint, opening the entire sky to AO by creating an “artificial star” in the telescope’s line of sight. A powerful laser attached to the telescope produces a glowing yellow spot high in the atmosphere above the telescope, providing the light source needed to measure atmospheric distortion.

AO on the Shane 3-meter Telescope

An AO/LGS system is a complex collection of optics, electronics, hardware and software that must all operate at high speed and in perfect unison.

The first AO/LGS system used for astronomical research was developed by the University of California Observatories (UCO) and Lawrence Livermore National Laboratory, and was deployed on the Shane 3-meter in 1996.

The technique proved so effective that there are now AO/LGS systems throughout the world. UCO continues to pioneer AO and LGS technologies, including a second-generation AO system and laser for the telescope